In August 2014, the WSJ reported about the first half year of private equity transactions in cyber security. There is a lot of investor interest, supported by the growing market demand and stream of reports on breaches and incidents.

Continue to other news

"Venture funding is booming, and corporations and government agencies are a big reason why. Those big-ticket customers are seeking the latest ways to ensure their networks are safe from cyber attacks, and investors are lining up to make sure they are ready to take advantage of the expanded market. In the first half of this year, venture capital firms put nearly $900 million into U.S. cybersecurity startups, nearly matching all of last year’s total dollars invested, and the sector was on pace to easily post the best mark in a decade: 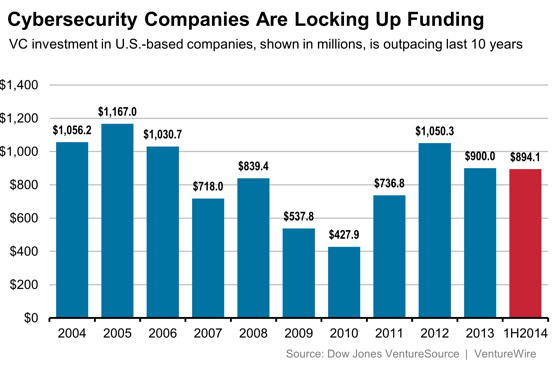 A list of transactions will be posted and regularly updated.

Early-stage deal and funding activity to cybersecurity firms hits a record. A16Z, SV Angel and Google Ventures are most active.

There is a growing investment market interest in cyber security. Over the past months many transactions have taken place in various stages of  development of a company or business. The fact that especially early stage is an active domain, provides a promosing outlook for cyber security entrepeneurs. A couple of investors and venture capital funds started to dedicate funds or realised to set-up a dedicated fund for investors. Also in Europe, funds and incubator facilities have recently started.

CB Insights reports : "As the bad guys get smarter, startups aiming to combat cybercrime and security breaches are proliferating – and bulking up. From endpoint protection to mobile app security, venture capital investors are writing checks to a diverse range of companies in the cybersecurity market. And things are getting especially interesting at the early-stage. Since 2010, early-stage venture activity (defined as seed/Series A financings) in the cybersecurity ecosystem has risen significantly as threats expand to new devices, cloud-based resources & virtual networks. In 2013, early-stage deals comprised 47% of all global cybersecurity financings. And 2014 has seen the early-stage surge continue with 54% of cybersecurity deals coming at the seed or Series A stage over the first 3 months of the year. Of note, cybersecurity early-stage deal activity hit its highest level since the start of 2010 in Q1 2014 at 42 deals. Q1 2013′s funding high was driven by a $225M Series A round to AirWatch, now owned by VMWare."

The top 20 most active early-stage cybersecurity investors based on the number of unique company deals are listed below.

IBM increased its cyber security focus which resulted in a 3x growth of its business, putting it closer to the likes of RSA, Trend Micro and Intel Security.

European companies on the rise, with companies such as Sophos, F-Secure, Codenomicon, but still many are missing. Also to note, some of the larger traditional security vendors appearing strongly as cyber security players.

The worldwide cybersecurity market continues to grow and grow as defined by market sizing estimates that range from $75 billion in 2015 to $170 billion by 2020.

The data comes from consolidated estimates by IT industry research and analyst firms, including these figures:

A report by Visiongain, a business intelligence firm in London, indicates that the global cyber security market is set to be worth $75.4 billion in 2015, as high-demand continues for information security solutions.
Research firm Gartner projects that the world will spend $101 billion on information security in 2018.
The cyber security market is estimated to grow to $170 billion (USD) by 2020, at a Compound Annual Growth Rate (CAGR) of 9.8% from 2015 to 2020, according to a report from Markets and Markets. The aerospace, defense, and intelligence vertical continues to be the largest contributor to cybersecurity solutions.
North America and Europe are the leading cybersecurity revenue contributors, according to a report from TechSci Research in Burnaby, Canada. Asia-Pacific is rapidly emerging as a potential market for cyber security solution providers, driven by emerging economies such as China, India and South-East Asian countries, wherein, rising cyber espionage by foreign countries is inducing the need for safeguarding cyber space.
Million dollar plus cybersecurity deals (vendors selling to end-users) are on the rise. In a recent research note, analysts at FBR & Co., an investment banking and M&A advisory firm, indicate that the number of seven-figure (cybersecurity) deals have increased by 40% year-over-year.
According to IDC, the hot areas for growth are security analytics (SIEM) (10%); threat intelligence (10%+); mobile security (18%); and cloud security (50%).
What explains the continual growth on cybersecurity spending? Cybercrime. According to Lloyd's of London, cybercrime is costing businesses up to $400 billion annually. As cybercrime rises, corporations and governments increase spending to defend and protect their digital networks and assets.

Cybercrime is also fueling demand for cyber insurance, a market that is growing alongside cybersecurity products and services. Last year, the insurance industry generated about $2.5 billion in premiums on policies to protect companies from losses as a result of cyber-attacks. That was up from around $2 billion a year before, and less than $1 billion two years before that.

The cybersecurity market continues to grow in international regions, as evidenced by the figures below - which are published by MicroMarketMonitor:

A careful look at the numbers indicates the EMEA market (Europe, Middle-East, and Africa) is expected to contribute approximately 35% of overall cybersecurity spending by 2019. Latin America is the fastest-growing region, and expected to grow more than twice as fast as the European market through 2019.

While non-U.S. cybersecurity markets are growing, they are relative new entrants when it comes to cyber insurance. Fortune recently reported that about 90% of cyber insurance is being purchased by U.S. firms, leaving other companies around the world exposed.

The top five by revenues, according to Gartner:

Over 2.5 Billion USD invested in cyber security technologies in 2014.

Early-stage deal and funding activity to cybersecurity firms continues to grow. New companies to watch on the list. Increased interest from traditional investors.

There is again a growing investment market interest in cyber security. While most of these numbers are from the US, similar activities have been seen in Europe, however to a lesser extent.

Q2'15 was strong for cybersecurity funding, with $704M invested across 47 deals. It was the highest quarterly funding total since Q2'14.

Cybersecurity is increasingly a hot sector for investment, especially as more valuable information goes digital, and corporations continue to suffer high-profile data breaches. We used CB Insights data to take a look at the overarching financing trends in cybersecurity, as well as top investors and companies. 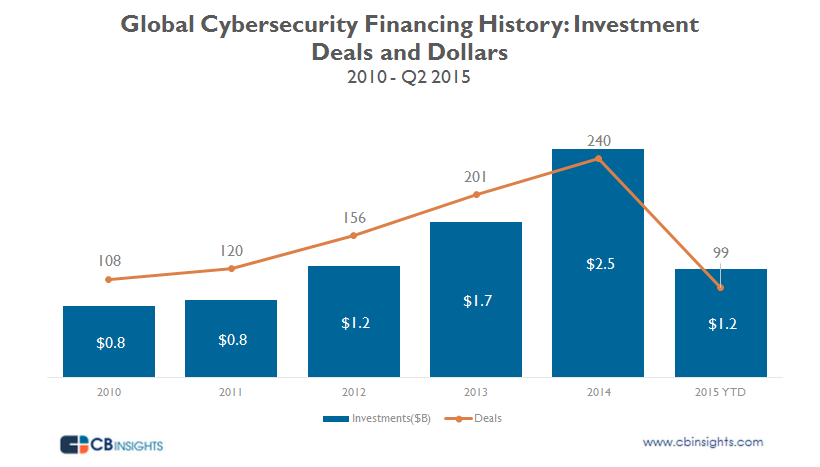 In the last eight quarters, including Q2’15, investors have plowed $4.6 billion into cybersecurity.

The strongest quarters for investment so far have been Q2’14, Q3’14, and Q2’15. Notable deals during those periods include a $90M growth equity round from Andreeseen Horowitz raised by Emeryville, California-based Tanium in Q2’14, and a $150M Series F round raised by Lookout in Q3’14 (at a $1B valuation), with investors including Khosla Ventures, Morgan Stanley, Goldman Sachs, and Andreessen Horowitz. In Q2’15 Accel Partners led a $100M Series C round that valued Illumio at $1B.

Deal flow has trended down for four quarters in a row, but Q2’15 was strong for funding with $704M invested across 47 deals. 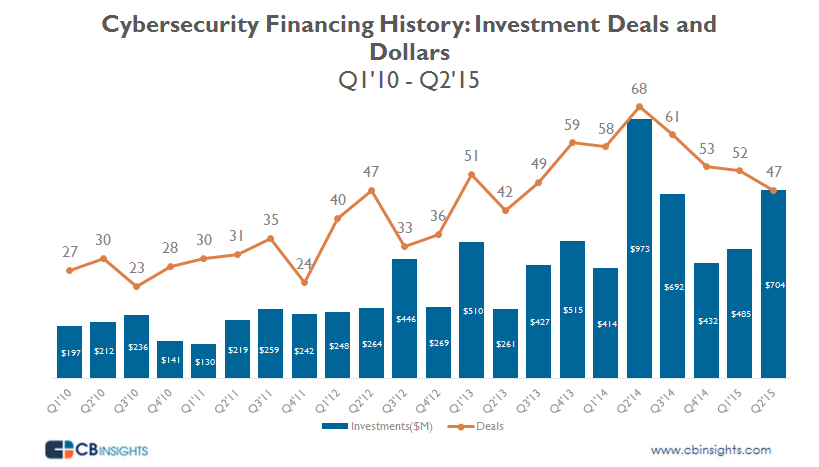 Cybersecurity Deals And Dollars By Round 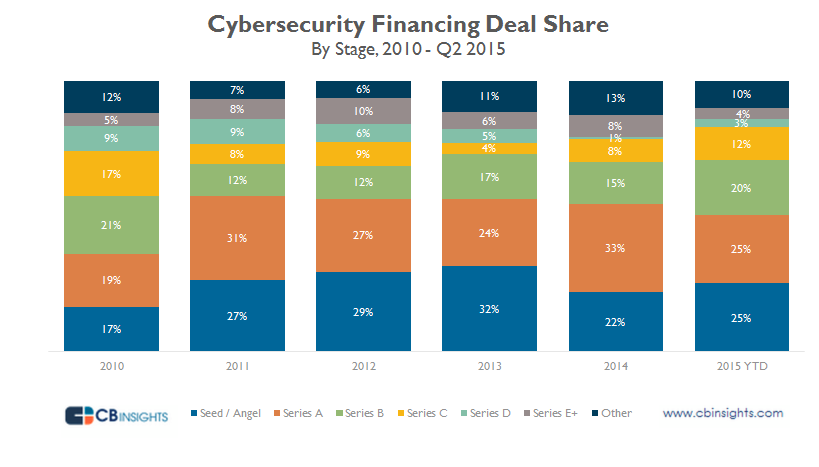 Early-stage dollar share has been pretty variable, fluctuating from 14% in 2010 to 33% in 2013. However, mid-stage funding occupied an uncharacteristically large share of funding dollars in 2015 year-to-date, at 58%. Late-stage funding was weak in the first two quarters of 2015, at only 20%. 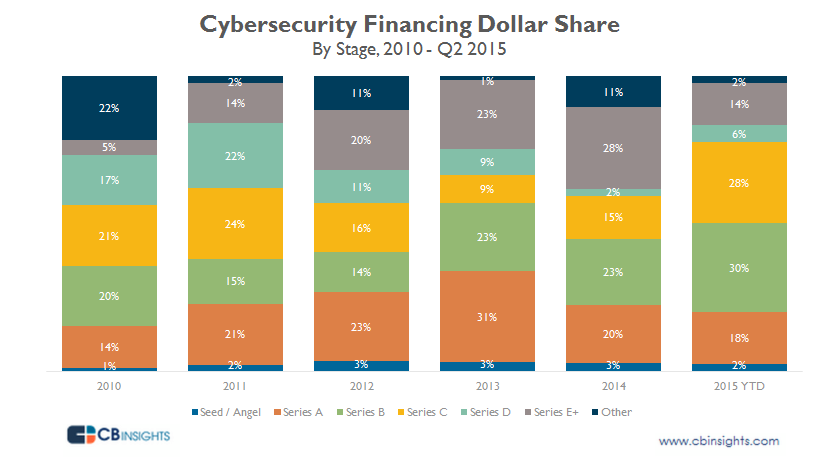 The most active cybersecurity investor the last 5 years has been Intel Capital. Intel was followed by Kleiner Perkins and Andreessen Horowitz. All of the top 6 investors had investments in 10 or more cybersecurity startups. Notable companies in the portfolios of the top 10 investor firms include Tanium, Good Technology, and Lookout. Only 2 of the 10 most active investors in cybersecurity were corporate venture funds: Google Ventures and Intel Capital (the latter was the top investor).

At the upcoming Infosecurity.be conference and tradeshow in Brussels, IPACSO gathers European Cyber Security innovators on the Security Innovations Pavillion. Meet some of the more interesting innovators such as Unomaly (SE), and many others.

For more information and registration to Infosecurity.be free of charge.