During the Concept Development activity, the goal is to create a model that can be verified in the Concept Assessment activity. This means that the concept has to be sufficiently elaborated so that customers can assess whether the concept is useful to them, and so that engineers can assess whether the innovation is technologically feasible (and at what cost). On the other hand, the concept does not have to be elaborated up to production level standards. Such elaboration happens later on during the Design Subtheme of the Product Theme. Elaborating any further than strictly required for assessment purposes at this point in the innovation process would be wasteful rather than useful.

Phased innovation models (as described in the Innovation Process theme) serve as a management tool to map, systemise, control and review innovation progress across the sequential phases involved in an innovation project (Hughes & Chafin, 1996). Often the concept phase serves as a key input entry phase of the innovation process.

Reflecting a project management orientation focus in terms of innovation modelling, the development funnel metaphor is also incorporated by researchers to illustrate the process from idea to innovation execution (Wheelwright & Clark, 1992); (McGrath, 1996)). The wide element of the funnel, reflects the idea generation/concept development stage and the funnel narrows as ideas progress through corresponding development, test and release phases (as illustrated in Fig 1)

The Stage-Gate process (Cooper, 1990) also represents distinctive and orderly phases (Figure 2). The innovation process, according to the Stage Gate model consists of a range of gates to evaluate the various stages in the innovation development journey.

Source: (McGrath, 1996)
The Stage-Gate process (Cooper, 1990) also represents distinctive and orderly phases (Figure 2). The innovation process, according to the Stage Gate model consists of a range of gates to evaluate the various stages in the innovation development journey. 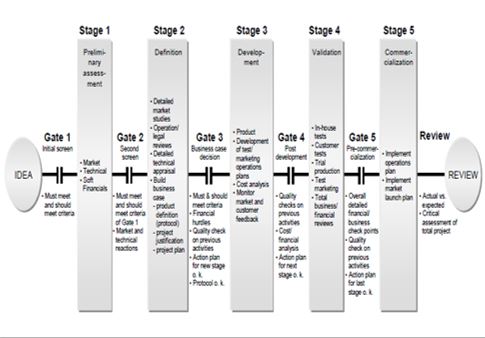 At gate 1, the idea is evaluated according to must meet and should meet criteria such as strategic alignment, feasibility or fit with company policies. (Verworn & Herstatt, 2002) describe the stage gates as follows:

(Ulrich & Eppinger, 1995) normative process model (Figure 3) resembles Cooper’s stage-gate-process through mapping activities each function carries out during the development of an innovation. The noteworthiness of this model for (Verworn & Herstatt, 2002) is “…the interdisciplinary point of view. Every function is weaved into each phase of the development process”. 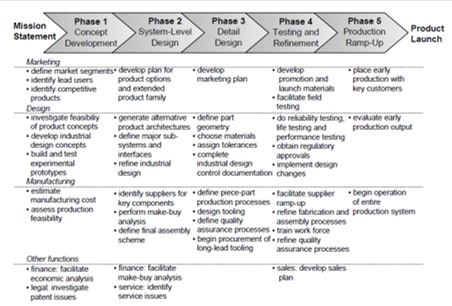 The ‘Business case’ of an innovation prospect and/or project reflects the materials and evidence prepared to demonstrate that the idea under consideration is commercially viable and therefore serves as a rational means for assessing the business value of potential investment. Reflective of this, (Cooper, 2001) incorporates business case analysis in the stage gate model to assess and screen the potential of a given innovation prior to incurring development costs. For (Kinnunen, et al., 2011) business case development involves four components: market-related, technical and financial information and the embedding of strategic issues in the decision making process (Figure 5).
Figure 5 Business Case Procedure 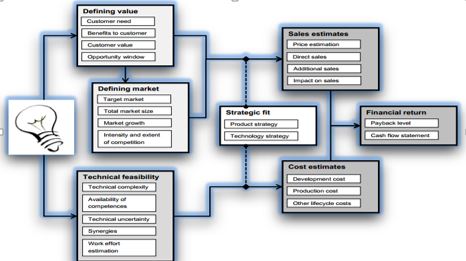 As can be seen from the (Kinnunen, et al., 2011) business case procedure model, the relevance of the aforementioned topics of innovation management and macro analysis are integral to shaping the innovation decision making process. In this context, business modelling which implies a conceptualisation, framework or blueprint for distinguishing a strategy to undertake, and the underlying organizational structures, processes and systems involved offers relevance. According to (Osterwalder & Pigneur, 2010) a business model describes the rationale of how an organization creates, delivers, and captures value. They elaborate on this model through mapping out nine basic building blocks that show the logic of how a particular organization intends to succeed (see Figure 6 below). 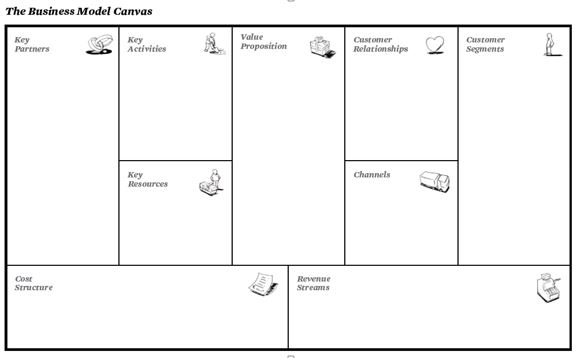 Business model mapping makes the implicit thinking behind the venture explicit; and allows the identification of economic value creation opportunities (existing and future), thereby allowing the business to take full advantage of the strategic partners, resources, channels and activities at its disposal to align customer’s needs with company offerings (Mitchell & Coles, 2003). As business model innovation looks beyond product or process innovation, it builds in strategies designed to enhance the flexibility of the business, create barriers to imitation and reduce costs. (Osterwalder & Pigneur, 2010) business model concept has been applied and is in use in organizations such as IBM, Ericsson, Deloitte and Government Services of Canada, but it has relevance for every organization as it covers the four main areas of a business: customers, offer, infrastructure and financial viability. Some organizations may have multiple business models in operation, with some aimed at satisfying a market, others focussed on improving or disrupting a market or bringing a new product/technology/service to the market, with other models creating a market for an entirely new type of business.

The business model mapping process involves systematically questioning the assumptions on which the business operates, and considering alternative means of creating value – these may be quantitative targets/performance indicators/ action points (e.g. price, speed of service) or qualitative (e.g. design, customer experience). The process of examining assumptions regarding market forces, industry forces, key trends and macroeconomic forces, will by its nature, allow users of the framework to get to grip with the complexities which need to be considered in developing/innovating a business model suitable for the specific environment/context .By employing the questioning techniques to the business model mapping or development process, management teams are able tame the information over-load common today and grasp the concept of where and how their business/products/services (can)delivers value, and focus on practical solutions that will deliver value to their customers. Visualisation tools and/ or idea generation using a trigger question methodology to question each building block as a starting point for this discussion, is recommended. A key result of the business model mapping process is that management teams will have a compass to enable them to identify and develop viable ideas and opportunities. According to (Osterwalder & Pigneur, 2010) the business model design process involves a series of iterative phases, which facilitate the business model’s exploration and description through the nine building blocks encompassing:

Complementing the business model process, (Mullins, 2003) New Business Road Test model offers an additional means for new start-ups to assess and develop their business case. The model (Figure 7) incorporates seven key components, four of which are industry and market focused and the remaining three are focused on the entrepreneurial and business development capacity of the innovator/entrepreneur. 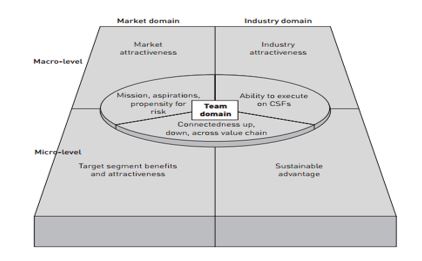 Similarly, (Blank, 2005) Four Steps to the Epiphany framework offers innovators a toolkit for navigating the complexities of determining the business value of their concepts and offers specific resources for customer engagement, insights into finding markets for products as specified, strategies and tactics for market navigation (entering existing or new markets) and strategies for managing and responding to product and company growth. The relevance of Blanks contributions are most noted in the area of value propositioning and hypothesis gathering/iteration to address the needs/demands of a customer base, which he describes in a four phased process:

In a similar vein, (Ries, 2011) lean start up theory evolved out of his experiences as a technology entrepreneur and the thrust of the theory (which is built on the prior work of Steve Blank) is that start-ups tend to be much higher-risk endeavours than they need to be. They build elaborate products before daring to test them with consumers. They make decisions based on the wrong information, and they stick with bad ideas long after they should. Their behaviour is supported by the entrepreneurial myths of innovators who persisted through endless rejection eventually to be validated by success. These rare cases, according to Ries, lead many to unnecessary failure. Instead, Reis claims that startups can shorten their product development cycles by adopting a combination of business-hypothesis-driven experimentation, and iterative product releases aimed at early customers. The Lean-startup movement (which can be thought of as Lean product/service development) (Maurya, 2012) advocates iterative rounds of small experiments. It posits that innovators should create a “minimal viable product – MVP” to collect the maximum amount of validated learning about customers with the least effort. The movement is also an advocate of repeated “split testing” – a technique derived from direct advertising, whereby modified versions of the same product are tested with different groups of customers to see which works best. The purpose of such Split or A/B testing is to observe differences in consumer acceptance of the Split test and to measure the impact of each version on an actionable metric. Kano Modelling (developed by Dr Noriaki Kano in the 1980’s http://www.kanomodel.com/about-the-kano-model/) is an additional alternative to Split testing for deciding which product/service features (threshold, performance and excitement attributes) to include in early releases.

The actual development techniques of a concept prototype depend on the actual product (e.g. a physical product such as a new biometrical sensor vs. a software product such as new on-line authentication software). As an example, we elaborate on a prototyping technique in the software industry. In (Cerejo, 2010) , the author describes Rapid Prototyping as a means of quickly mocking up the future state of a product (or in this case, of the innovative software product). The rapid prototyping process should follow the well-known three-step cycle prototype-review-refine (where prototype and refine would fall under the “Concept development” activity, and review under the “Concept assessment” activity).
One might wonder how much of a concept needs to be prototyped in order to be useful. A general rule of thumb is provided by the Pareto principle. Find the 20% of functionality that will be used 80% of the time, and prototype that. Now weave those functionalities together so that they form a story that you can walk the user through.

When designing the prototype, be sure to choose the correct fidelity for three important aspects:

Many different tools can be used to achieve the various types of fidelity. The simplest tool for prototyping is pen and paper. Sketching a prototype leads to a low fidelity model on the three dimensions. The advantage is that it is quick, mostly anyone can do it, and it lets the user focus on functionality. Also, because of the low investment made by the designer, he or she is likely to be more open to suggested design changes.
Next are the various software prototyping tools, ranging from simple wireframing tools to tools that can generate fully functional, clickable prototypes containing scenarios and allowing for interactive feedback. An example of the first type of tool is Balsamiq, an example of the second type is Axure.
Finally, one can code an actual prototype with rapid UI toolkits such as Bootstrap or Foundation. The advantage is that this can lead to a realistic prototype. The disadvantage is that the investment is very high, and development is relatively slow.
Important to note is that the goal of the prototype should always be to assess the fit of the concept with the problem defined in the Problem Definition activity. This Assessment activity is described in the next activity, “Problem fit assessment”.