Innovation in an organization does not happen by coincidence or “magic”. Instead, there needs to be a systematic process in place that creates the right environment for innovation in an organization to arise (John Jeston, 2008). The view that large gains in efficiency and effectiveness can be gotten from adopting a process oriented approach has gained considerable influence in the past two decades. As described in (Hammer, 2007):
In virtually every industry, companies of all sizes have achieved extraordinary improvements in cost, quality, speed, profitability, and other key areas by focusing on, measuring, and redesigning their customer-facing and internal processes.
The Process theme consists of two parts. First, we provide an overview various innovation processes that exist outside of the PaCS Core Innovation Process. In this section we also introduce the notion of “lean” innovation as an alternative approach. In addition, we introduce those governance tools and activities that an organization can use to assure itself of the approach it has taken regarding the innovation process itself. Using this theme, an organization can assess its innovation process maturity level and indicate gaps between its current state and desired state.

Given the proliferation in research and scholarly attention afforded to innovation over the last three decades, a diverse range of innovation modelling processes exist in the literature. The existing catalogue of process models of innovation can be generally subdivided into three umbrella categories: (1) Linear (2) phased models, and (3) non-linear, coupling, cyclical models.

LINEAR PROCESS FLOWS
Early models of innovation presented innovation as a linear phenomenon where each aspect was considered modular and unconnected to other parts of the innovation process. The linear model hypothesises that innovation starts with basic research, followed by applied research and development, and culminating with production and diffusion. The theory identifies two traditional linear underpinning approaches to innovation (Rothwell, 1994); “Technology push” and “demand pull”. Regarding technology push, innovation is seen considered to be driven solely by scientific advances whereas the latter demand pull approach views innovation as a response to demands for new products and processes. However, it was found early on that these models did not survive empirical scrutiny as this representation oversimplified the innovation process. Indeed, (Kline & Rosenberg, 1986) note that models that depict innovation as “…a smooth, well-behaved linear process badly misspecify the nature and direction of the causal factors at work. Innovation is complex, uncertain, somewhat disorderly, and subject to changes of many sorts”.

PHASED PROCESS FLOWS
Phased models (Figure 1) serve as a management tool to map, systemise, control and review innovation progress across the sequential phases involved in an innovation project (Hughes & Chafin, 1996). As illustrated in Figure 1 below, Inputs and outputs for each phase are defined with management reviews at the end of each phase to determine the continuation of a project (“go-no-go”). The advantages of such an approach is in reducing uncertainty and promoting completion of sub stages of the innovation process. Equally so, the phased approach deals primarily with the development phase, and fails to accommodate any commercialisation perspectives (Verworn & Herstatt, 2002).

The process model by Pleschak et al. (Figure 2) delves into more detail across each stage of the innovation process and introduces the role for external stakeholders. Of merit for framing the range of issues surrounding innovation modelling, the Pleschak model specifically accommodates “…the possibility of truncation during every stage of the innovation process due to the rejection of an idea, technical or economical failure similar to Cooper’s gates” (Verworn & Herstatt, 2002). 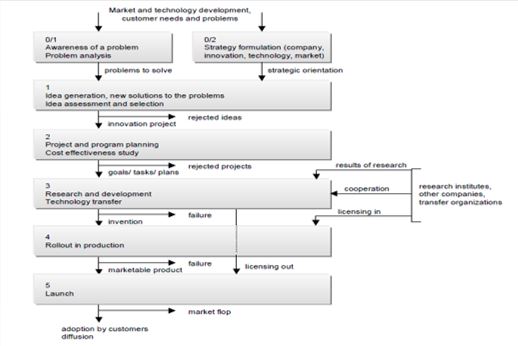 The Stage-Gate process (Cooper, 1990) also represents distinctive and orderly phases (Figure 3). The innovation process, according to the Stage Gate model consists of a range of gates to evaluate the various stages in the innovation development journey.

Source: (Cooper, 1990)
At gate 1, the idea is evaluated according to must meet and should meet criteria such as strategic alignment, feasibility or fit with company policies. (Verworn & Herstatt, 2002) describe the stage gates as follows:
• Stage 1 represents a preliminary assessment of the project in terms of market, technology, and financials.
• After passing a second gate, a detailed investigation follows during stage 2 definition. Output from this stage is a business plan which is the basis for the decision on business case at gate 3.
• Stage 3 contains the actual development of the product and a marketing concept. Deliverable of this stage is a prototype product.
• Gate 4 ensures that the developed product is consistent with the definition specified at gate 3. In-house product tests, customer field trials, test markets, and trial productions are typical activities during the validation stage 4.
• Gate 5 decides on production start-up and market launch, which follow during stage 5. Objective of a terminating review is to compare actual with expected results and assess the entire project.

(Ulrich & Eppinger, 1995) normative process model (Figure 4) resembles Cooper’s stage-gate-process through mapping activities each function carries out during the development of an innovation. The noteworthiness of this model for (Verworn & Herstatt, 2002) is “…the interdisciplinary point of view. Every function is weaved into each phase of the development process”. 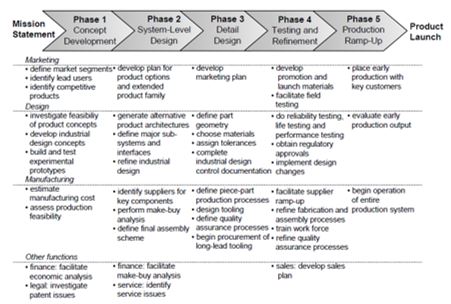 Reflecting a project management orientation focus in terms of innovation modelling, the development funnel metaphor has been incorporated by researchers to illustrate the process from idea to innovation execution (Wheelwright & Clark, 1992); (McGrath, 1996)). The wide element of the funnel, reflects the idea generation/concept development stage and the funnel narrows as ideas progress through corresponding development, test and release phases (as illustrated in Fig 5)

The pentathlon framework accommodates a wider range of soft organisational issues than the traditional linear innovation model. It overcomes the deficiencies of typical phased models by including: HRM, Creativity/Ideas Management, the selection of priorities, and the importance of market conditions (in respect of the products, processes and services). At the top of the model lies the role of an innovation strategy, which will dictate what is needed in terms of the focus and goals, communication, technology and the measurement of success. In the middle of the model, a flow is often conceptualised within a funnel, indicating a move of the ideas through a prioritisation process as and through to implementation and new product development interactions with the marketplace. Underneath this middle section, the model depicts the formalisation of the human element in innovation. The pentathlon framework (Goffin & Pfeiffer, 1999) is distinctive from earlier models in featuring the human factor in innovation; specifically, recognising how the people and organizational climate play a role, and consequently, the value of seeking a conducive culture, where people are motivated to innovate.

Mindful of the combination of technical activities occurring in the innovation process, the external forces of the market place, as well as the complex interac tions and iterations between the various stages of the process, researchers in the field of innovation have developed more complex and inclusive models based upon the limitations of linear and sequential models (Leger & Swaminatham, 2007).

NON-LINEAR PROCESS FLOWS
Kline and Rosenberg’s Chain Linked innovation model (Figure 6) combines both market pull and technology push orientations, identifies five paths of innovation process (C): starting with the perception of a new market opportunity and/or a new science and technology-based invention; this is necessarily followed by the ‘analytic design’ (D) for a new product or process, and subsequently leads to development, production and marketing (Kline & Rosenberg, 1986). 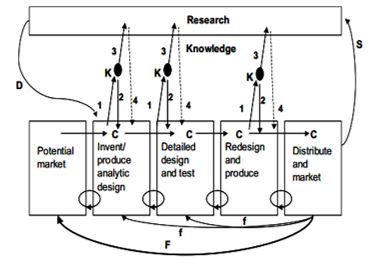 The process accomodates feedback loops (f, F) link each downstream phase in the central chain with the phase immediately preceding it and longer feedback loops link perceived market demand and product users with phases upstream. The second set of relationships links the innovation process embedded in firms and industries with the scientific and technical knowledge base and with research (K). In terms of use case scenarios – innovators search the existing knowledge bases to seek a solution to an identified problem (1), and if such solutions are available, continues along the innovation chain(2). If no solution knowledge is available, then the innovator resorts to conducting research (3). The restults of such research activities are then fed into the innovation chain (4). Finally, the results are subsequently integrated into the scientific arena (S).

Earlier versions of Cooper et al.’s Stage Gate process models prescribed that the next phase can only start, if the project complied with all the requirements prior one. However, the stage gate process has evolved to incorporate feedback and spiral loops to address the limitation of a sequential pattern, as illustrated in Figure 7.

Figure 7 The Next Generation Idea to Launch System

Departing from a linear conceptualisation, Berkhout’s Cyclic Innovation Model (CIM) developed in the nineties views the innovation process as more than just technical invention and describes the innovation arena by a ‘circle of change' linking changes in science (left) and industry (right), and changes in technology (top) and markets (bottom) (Berhkout, 2000); (Berkhout, et al., 2007). As illustrated in Figure 8, the model architecture is not a chain but a circle: where ideas may start anywhere in the circle and proceed clockwise or anticlockwise. Equally, the model portrays a system of dynamic processes –with four ‘nodes of change’: scientific exploration, technological research, product creations and market transitions and between these nodes there are ‘cycles of change’ (Berkhout, et al., 2010). 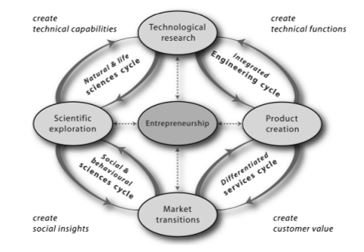