This section provides a summary of EU funded R&D activities, with particular emphasis on PACs-related FP7 projects, the core of which are funded under the FP7-ICT Trust and Security umbrella. Projects included here are either already completed or have already presented significant findings and are at the latter stages of completion.

Several parallel FP7 project initiatives have provided their own analyses of FP7 Trust and Security activities, most notably the SecCord, FIRE and EFFECTS+ initiatives, and their key findings are strongly reflected in this section [SEC14], [FIR13], [EFF11].

The CORDIS system classifies Trust and Security projects into several key silos as depicted in Table 11.1 below. While the mapping aids comprehension of the broad scope of such efforts across ICT hardware and software, in reality many of the funded projects are cross-cutting across several of the categories below. Key summary silos are as follows:

Such emphases sit within broader “future internet” initiatives, as well as towards achieving the goal of improved critical information infrastructure protection. Funding is also provided towards projects that support overall interactions and co-ordination between EU projects.

Other project clustering activities have proposed other classification mechanisms; for example the EFFECTS+ initiative proposes further project classifications based on (1) Technology Abstraction Level, whereby project themes are classified based on the layers in the technology stack that they focus on, and (2) Security Selling Proposition, the latter labelled as a “Provisioning” or “Assessment” proposition, relating to the commercial service that their outputs provide [EFF2_11].

Figure 11.1 below provides a historical summary of funding breakdown activities (based on SecCord analysis of FP7-ICT calls 1, 5 and 8) – projects emphasising Secure Services (21%) and Enabling Technology and Tools (21%) account for the largest portions in budget terms, followed by Secure Networks and Privacy Technologies (both at 14%).

Table 11.2 indicates how funding allocations have evolved for each of the categories across FP7 ICT Calls 1, 5 and 8 over time. While emphasis on earlier calls was positioned towards thematic areas positioned “within” PACS (e.g. Secure Services, Networks, Privacy, and information protection), emphasis since then has shifted somewhat towards the wider ICT context in which security and privacy techniques are applied - particularly themes such as the application development lifecycle, the cloud, and emerging mobile and sensor-based devices in particular – with related areas receiving increasing rates of funding in relative terms. In turn, as a wider spectrum of research projects receive funding, funding rates around networking and co-ordination activities are also receiving increased priority. 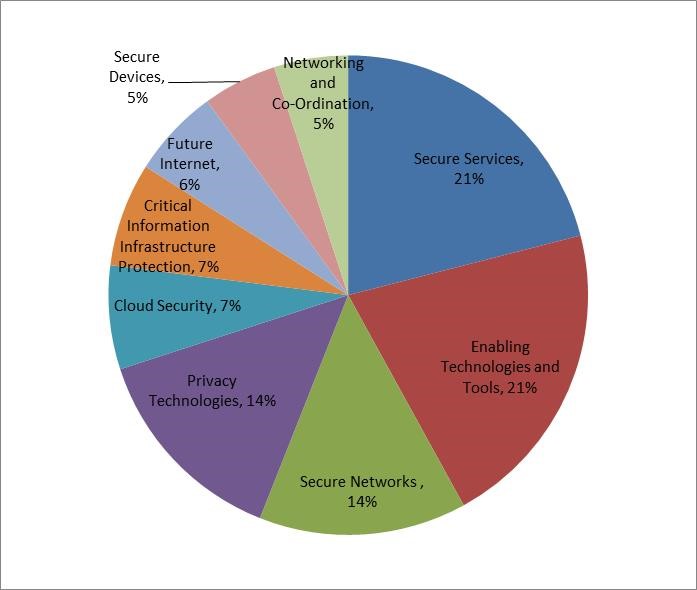 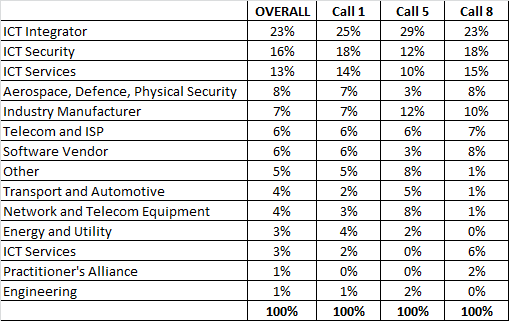 The EU have supported a broad number Trust and Security projects across FP7 ICT Calls 1, 5 and 8 across many of the thematic areas already described in this section. A summary overview of key projects is provided in Appendix A, in particular based on prior analysis from SecCord project activities [SEC14]. Many of these are referred to throughout remaining discussion in this section. Most Call 1 and 5 projects are already complete, whereas later Call 8 projects are still presently a work-in-progress.
Several past FP7-ICT projects have also placed emphasis on co-ordination and analysis across EU Trust and Security Research, defining go-forward research agendas, and promoting greater commercialisation and innovation from funded research outputs. Key project initiatives include:

Several other roadmapping projects have been commissioned, for example SysSec, STREWS (standardisation emphasis), INCO-Trust, CAMINO (cyber-crime), and PARSIFAL (critical finance infrastructures) among others.

The following table provides a summary overview of key EU-funded Trustworthy ICT projects across calls 1, 5 and 8. Further detail and analysis (on these and other similar projects) is provided in the SecCord Research and Innovation Yearbook.

Clearly quantifying the outputs and impact of such research is a non-trivial task, particularly as PACs is a process driven endeavour where commercial paths from new insights are often unclear and varied in nature. Much of the outputs relate to knowledge transfer, which is manifested both in security-specific products and processes, as well as more generalist ICT processes and systems.
SecCord analysis highlights a number of key project success stories. Considerable successes have been highlighted around work on privacy preserving electronic identity, and related work in the PRIMELIFE and ABC4TRUST projects – where pilots have been executed in Greece and Sweden, and work is being reflected in standardisation activities around OASIS and SAML v2.0. Activities in AVANTSAAR in relation to single sign-on (SSO) systems identified significant faults in Google’s SSO service which if exploited would have huge global impact. The research also highlighted the likelihood that similar flaws existed in other proprietary SSO mechanisms. Significant high-potential advances have been made in the secure multi-party computation domain in the SECURESCM project, with SAP (Germany) exploiting several innovative project achievements in their SAP Benchmarking suite in particular.

However other sources identified a large number of constrasting barriers to successful and tangible commercial outcomes from such project activities. For example, analysis of several T&S projects as part of the FIRE CSA project itemised such barriers into the following high-level categories [FIR2_13]:

Table 11.5 elaborates on these and other identified barriers in further detail, as identified from existing interviews and analysis of EU PACs projects.

In relation to the particular pursuit of highly disruptive innovation with strong extended commercial impact - what makes this goal so difficult to achieve, and how might better innovation supports be developed to support this aim?
Based on analysis inputs from multiple sources within the PACs context around R&D and close-to-market projects, several explicit innovation stages have been highlighted as particular challenge stages throughout this analysis.

These key challenges are interleaved with a broad range of more tacit concerns. These stages are:

Traditionally, these stages are all identifiable from a typical R&D project approach alongside core technology development – and are common requirements of typical EU funded technology projects. However a core criticism is that while the core technology development stage is often addressed in the most systematic manner, crucial support stages such as those above are not pursued with the same rigour for many reasons. These stages can often be heavily under-resourced (leading to wasteful technology development tasks that are misaligned or doomed to fail at an early stage), are often managed by teams with skillsets misaligned with the tasks, are performed either too early or late in the project cycle, are not delineated appropriately as explicit stages or phases with decision points, in line with phased best practices found in typical innovation frameworks. Existing R&D projects are also not clinical enough in killing projects if results from certain stages are not favourable, particularly if outputs from requirements, scenario gathering, and market assessment aspects findings are not up to standard. Another crucial factor in the defence of researchers and innovators however is that executing these stages is not trivial and can be highly challenging to do correctly.

Such misalignments ultimately lead to long cycles of wasted investment, where knowledge transfer and incremental innovations assets may be produced, but lead to greatly limited possibilities for highly disruptive commercial impact.