It has been almost three years since the last Startup Ecosystem Report was released in November 2012, and since then the startup sector has grown at a booming pace.

The centerpiece of the 2015 Startup Ecosystem Ranking is our updated and revamped component index, which ranks the top 20 startup ecosystems around the world. The index is produced by ranking ecosystems along five major components: Performance, Funding, Talent, Market Reach, and Startup Experience.

I. The Increasing Socioeconomic Impact of Startup Ecosystems

Twenty years ago, almost all tech startups were created in startup ecosystems like Silicon Valley and Boston. Today, technology entrepreneurship is a global phenomenon, with startup ecosystems similar to Silicon Valley rapidly emerging all around the world. An interconnected, global startup landscape is taking shape and we’ve gathered the data and crunched the numbers that nobody else has to help you understand how to best navigate this brave new economic world.

In September 2011, we wrote a blog post about the coming “Entrepreneurial Enlightenment” and the factors behind its emergence. The era is in full bloom now and there has never been a better time to be a tech entrepreneur, as entrepreneurs are now blessed with the tools, resources, and market conditions to scale a company to billion dollar “Unicorn” status faster than ever before.

The rise of the startup ecosystems all around the world should also be seen in the context of the larger socioeconomic structural shift taking place. Information Era businesses have become the dominant source of economic growth, significantly automating or altering much of the industrial and service businesses of the previous economic era. Many others have described aspects of this structural shift under different names, such as Marc Andreessen’s widely circulated Wall Street Journal essay, “Why Software is Eating the World”, Deloitte Center for the Edge’s semi- annual “Shift Index”, or Richard Florida’s Creative Class Group, which has published numerous books on the topic, such as the “Rise of the Creative Class.”

One of our main goals with this report is to help various stakeholders answer the following kinds of questions:

a) For Entrepreneurs: “Where should I start my new company?” “When I’m ready, where should I open up my startup’s second office?”

b) For Investors: “How can I find new startup investment opportunities around the world instead of simply settling for solely investing in my local startup ecosystem due to familiarity?” “Given the dearth of information out there about emerging startup ecosystems, how do I evaluate which ones I should focus on for finding new opportunities?”

c) For Policy Makers: “What initiatives should I prioritize in my startup ecosystem to maximize growth?” “How should I measure the progress of these initiatives?”

d) For All Stakeholders: “What is the best way to strengthen the overall vibrancy and entrepreneurial spirit in my ecosystem?”

Without further adieu, here is the ranking, with analysis to follow.

One important caveat to note: Our index does not currently include startup ecosystems from China, Taiwan, Japan, and South Korea. The language barrier slowed our ability to gather enough to include them in the ranking. We expect to have these ecosystems included in our ranking later this year. 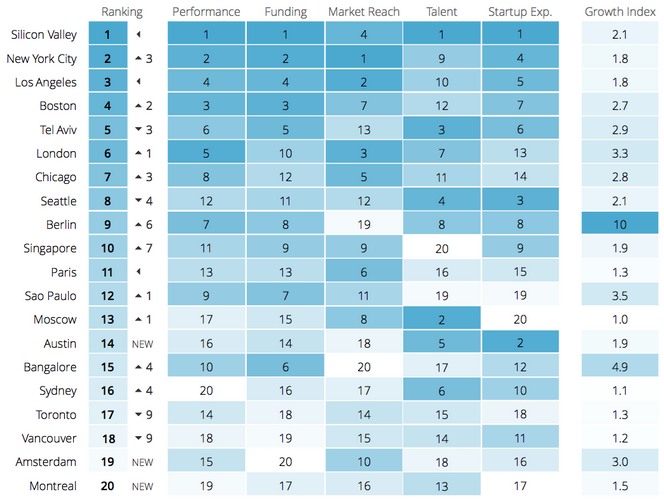 - 37% of all funding rounds in the top 20 ecosystems have at least one investor from another ecosystem. In North America this is 41%.

In the top 20 ecosystems, the number of offices that are 2nd offices from startups outside the ecosystem or headquarters of startups that were founded elsewhere and moved to the ecosystem, rose by 8.4x from 2012 to 2014.

Looking at the relative growth rates of exit value, we see Silicon Valley growing at a 47% rate over the last two years, whereas many other ecosystems further down the index are growing at a much faster pace.

London has quadrupled in the same timeframe, and Berlin has grown by a factor of 20 (due primarily to the two big IPOs of Rocket Internet and Zalando).

Analysis: Over the coming years we expect Silicon Valley to stay in the lead, even while other ecosystems temporarily grow at a faster pace, with the expectation of ultimate convergence towards an equilibrium that looks a fairly conventional 80/20 power law; i.e. Silicon Valley capturing 30-50% of the total exit pie, the next three startup ecosystems capturing an additional 30-50% of the pie and the following top 16 startup ecosystems capturing the remaining 20% of the total exit pie.

The ecosystems with the most growth in VC investments were Berlin (12x), Bangalore (4x), Boston (3.7x), Amsterdam (2x), and Seattle (2x). Meanwhile, Silicon Valley almost doubled up with 93% growth from 2013 to 2014, with indications from Crunchbase that almost all of the increase in Silicon Valley funding was in late stage Series B and Series C+ capital rather than early stage capital, which was relatively stagnant.

The startup ecosystems with the fastest annual growth in the number of seed rounds over the last two years were Bangalore (53%), Sydney 33%), and Austin (30%). Boston, Vancouver, and Montreal all experienced relatively modest growth.

The startup ecosystems which made the biggest leaps are New York, Austin, Bangalore, Singapore, and Chicago. New York City made a significant leap among the established players, moving from position #5 to #2 to take the silver medal. Austin, Texas, meanwhile leapt all the way into #14th place, whereas three years ago they didn’t even crack the top 20. Bangalore moved from #19 to #15, Singapore from #17 to #10, Berlin from #15 to #9, and Chicago from #10 to #7.

The startup ecosystems which made the biggest falls are Vancouver, Toronto, Sydney, and Seattle. Vancouver slipped out of the top 10 from position #9 to #18, Toronto slid from #8 down to #17, Sydney dropped from #12 to #16, and Seattle fell from #4 to #8. Again, all of these ecosystems did grow in the past three years, but not as fast as other environments, which puts them at risk of eventually being left behind.

Three ecosystems fell out of the top 20 completely since 2012: Santiago, Melbourne, and Waterloo. Santiago had fast initial growth, but ended up peaking fairly quickly, and the growth of Melbourne and Waterloo likely took a hit due to their close proximity to the larger startup ecosystems of Sydney and Toronto, respectively. Smaller ecosystems with close proximity to larger ecosystems often have a hard time continuing to grow due to new and existing talent and capital migrating to the larger nearby ecosystem.