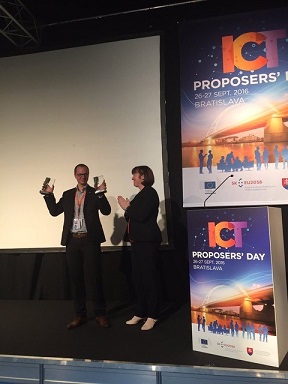 The 2016 Innovation Radar Prize was awarded to Intrinsic-ID, an SME world leader in the field of embedded authentication from the Netherlands. The winner, announced at ICT Proposers Day in Bratislava, developed within the EU-funded project PUFFIN an authentication technology, based on the electronic fingerprint of devices. Using their patented Physical Unclonable Function (PUF) technology, secret keys and identifiers are extracted from the unique physical properties of chips to provide seamless and secure protection of digital assets for markets like IoT, mobile, smartcards and government and defence. Intrinsic-ID was named overall Innovation Radar winner, and also won in the Innovation Radar prize for the Excellent Science category.

About the Innovation Radar Prize
The European Commission has put the spotlight on Europe's most promising digital innovations emerging from EU funded research and innovation projects. Using the Innovation Radar, a EC initiative to identify high potential innovations and innovators in EU-funded research and innovation ICT projects, 40 innovators, coming from every corner of Europe, from SMEs, university teams, spinoffs and start-ups have been identified. The 40 nominees competed during the entire month of August, for a place in the Innovation Radar Finale. The public had a chance to vote on the Digital Single Market website for the innovator that impressed them the most. 28 000 votes shortlisted 16 innovators from around Europe. Their innovations cover a wide range of markets from video production to data management to transport logistics to augmented reality. The finale took place in Bratislava, where a panel of 4 judges decided the winners on the basis of a 3 minute pitch delivered during a special pitching session at ICT Proposers Day.